Acne is a common skin condition that affects most people at some point. It causes spots, oily skin and sometimes skin that's hot or painful to touch.

Acne most commonly develops on the: 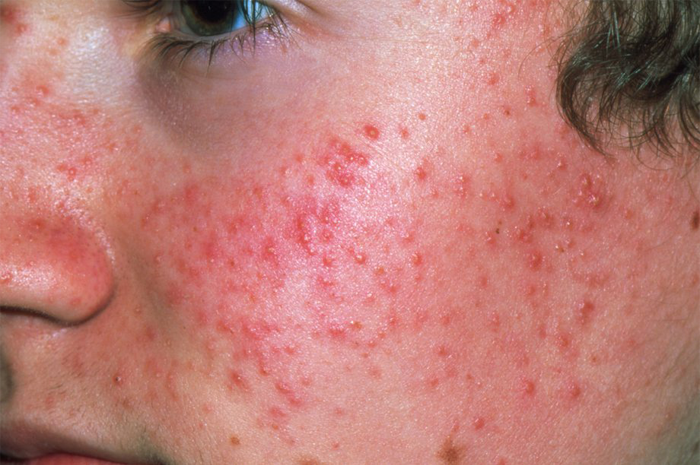 There are 6 main types of spot caused by acne:

Acne is very common in teenagers and younger adults. About 80% of people aged 11 to 30 are affected by acne.

Most people have acne on and off for several years before their symptoms start to improve as they get older. Acne often disappears when a person is in their mid-20s.

In some cases, acne can continue into adult life. About 5% of women and 1% of men have acne over the age of 25.

Acne is most commonly linked to the changes in hormone levels during puberty, but can start at any age.

It's caused when tiny holes in the skin, known as hair follicles, become blocked.

Sebaceous glands are tiny glands found near the surface of your skin. The glands are attached to hair follicles. These are small holes in your skin that an individual hair grows out of.

Sebaceous glands lubricate the hair and the skin to stop it drying out. They do this by producing an oily substance called sebum.

In acne, the glands begin to produce too much sebum. The excess sebum mixes with dead skin cells and both substances form a plug in the follicle.

Harmless bacteria living on the skin can contaminate and infect the plugged follicles. This causes papules, pustules, nodules or cysts.

Certain hormones affect the grease-producing glands next to hair follicles in the skin. They can cause them to produce larger amounts of oil (abnormal sebum).

This oil changes the activity of a skin bacterium called P. acnes. P. acnes is usually harmless, but it becomes more aggressive with the oil and causes inflammation and pus.

Acne is known to run in families. If both your mother and father had acne, it's likely that you'll also have acne.

Hormonal changes, such as those that occur during the menstrual cycle or pregnancy, can also lead to episodes of acne in women.

There's no evidence that diet, poor hygiene or sexual activity play a role in acne.

Teenage acne is believed to start due to an increase in testosterone.

Testosterone is a hormone that occurs during puberty. It's important for the development of the penis and testicles in boys.

It is also important for muscle and bone strength in girls.

The sebaceous glands are particularly sensitive to hormones.

A rise in levels of testosterone is believed to cause the glands to produce much more sebum than the skin needs.

Other possible triggers of an acne flare-up include:

Acne is not caused by a poor diet

So far, research hasn't found any foods that cause acne. Eating a healthy, balanced diet is recommended. This is because it's good for your heart and your health in general.

Acne is not caused by having dirty skin and poor hygiene

Most of the biological reactions that trigger acne occur beneath the skin, not on the surface. The cleanliness of your skin has no effect on your acne. Washing your face more than twice a day could just aggravate your skin.

Squeezing blackheads, whiteheads and spots is not the best way to get rid of acne

This could actually make symptoms worse and may leave you with scarring.

Sexual activity has no influence on acne

Sunbathing, sunbeds and sunlamps don't help to improve the symptoms of acne

There's no evidence that exposure to sunlight or using sunbeds or sunlamps can improve acne. Many medications used to treat acne can make your skin more sensitive to light. Exposure could cause painful damage to your skin, and also increase your risk of skin cancer.

Acne is not infectious

You can't pass acne on to other people.

A GP can diagnose acne by looking at your skin.

This involves examining your face, chest or back. They will look for the different types of spot, such as blackheads or sore, red nodules.

How severe your acne is will determine what treatment you should have.

The severity of acne is often categorised as:

When to seek medical advice

If you have mild acne, speak to your pharmacist. They can give you over-the-counter medicines to treat it.

If these don't control your acne, or it's making you feel very unhappy, see your GP.

You should see your GP if you have moderate or severe acne. Talk to them if you develop nodules or cysts. These need to be treated properly to avoid scarring.

Try to resist the temptation to pick or squeeze the spots, as this can lead to permanent scarring.

Treatments can take up to 3 months to work, so don't expect results overnight. Once they do start to work, the results are usually good.

Acne and hormonal imbalance in women

If acne starts in adult women, it can be a sign of a hormonal imbalance, especially if it's accompanied by other symptoms such as:

The most common cause of hormonal imbalances in women is polycystic ovary syndrome (PCOS).

PCOS can be diagnosed using a combination of ultrasound scans and blood tests.

Content supplied by the NHS and adapted for Ireland by the HSE.

Back to top
Welcome to the Quit smoking Live Chat

Some text in the modal.