Get the latest information on COVID-19

7 things to know about alcohol and your weight

Find out why alcohol intake should be at the top of your list for weight management. 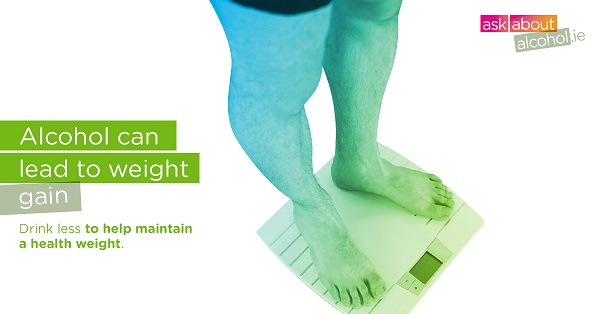 DIET AND EXERCISE are the first things most people look to when considering weight management, but for many of us, alcohol intake should be at the top of that list too.

As well as having overall negative health implications, alcohol is calorie dense, as Professor Donal O’Shea, chair of the Royal College Of Physicians’ Policy Group on Obesity, points out:

People often don’t consider the amount of calories in alcohol as part of their look-back at their daily intake. They’ll consider a gin and tonic, at 160 calories, to be the same as an Americano, at four calories.

For example, on an evening out with dinner, drinking two pints before eating and two glasses of wine during dinner totals around 620 calories from alcohol alone.

“Many people have more than [two pints and two glasses of wine] and reach over 1,000 calories before they have any food,” Prof O’Shea adds. “Before you know it, your total daily calorie allowance of 1,600 to 2,000 calories has been consumed in one sitting.”

It’s not just a numbers game, however. Read on for seven ways in which alcohol is linked to your weight, how your body breaks down food, and how much you eat.

1.  Calories in alcohol are “empty calories”

A healthy diet is one that contains enough fuel for your body and the right nutrients to keep everything working as it should, which is why it’s important to consume meals that have balanced amounts of protein, carbohydrates and fats.

Unlike food though, the calories in alcohol contain little to no nutritional value. Alcohol calories don’t fill you up like food calories do, hence the term “empty calories.

2.  Alcohol can slow down your body’s fat-burning process

Your liver is responsible for storing and processing all of the fat, carbohydrates and protein that you consume, breaking them down and metabolising them into energy.

However your body cannot store alcohol, meaning it must be broken down ahead of everything else. This interruption slows down your metabolic rate and reduces the amount of fat your body burns for energy.

3.  Alcohol itself is very calorie dense

For every gram of alcohol you consume, you’re taking in almost double the amount of calories than if you were to consume the same quantity of protein or carbohydrates.

Seven calories per gram may sound low in its own right, but when you consider that a standard pint of beer contains around 20g of alcohol, those numbers soon add up.

4.  It’s not just the alcohol itself, other ingredients come into play

Pure alcohol isn’t the only factor affecting the calorie content of an alcoholic drink. The ingredients that form part of the production process – like sugar, wheat, barley and grapes - all contribute to your drink’s calorie count.

Mixed drinks and cocktails, meanwhile, can be a minefield of calories thanks to the other ingredients that are added during preparation. Even if you know what has been added, it’s difficult to figure out exact quantities, and serving sizes can vary between different bars and restaurants.

5.  Alcohol calories can make you hungrier

Most of us have experienced the increased feelings of hunger or food cravings that come with drinking alcohol. But why do they happen?

Firstly, alcohol can trigger the part of the brain that makes you feel hungry, which could explain why people often overeat after drinking.

Secondly, drinking alcohol causes your blood sugar to drop, by interrupting the way in which your liver breaks down glucose and releases it into the bloodstream. A balanced blood sugar level is important for keeping cravings at bay. Once your blood sugar dips, you’re more likely to reach for a quick sugar fix.

6.  Your inhibitions are lowered when you drink

Alcohol lowers your inhibitions, which is bad news for your willpower.

If you’ve ever started a night out with the best of dieting intentions but ended up tucking into dessert or a late-night portion of chips after drinking, you’ll know the effect alcohol can have.

7.  There is some good news, though

If you’re trying to lower your calorie intake but aren’t keen on messing with your meals, cutting down on alcohol is a straightforward place to start. Your body won’t miss alcohol’s “empty calories” in the way it might miss food, and, as mentioned above, you’re less likely to overeat or make unhealthy food choices when you’re not drinking.

Want to cut down on the amount of alcohol you’re consuming?

Whether you’re watching your weight or simply keen to limit your alcohol intake, here are some tips to make it easier:

Back to top
Welcome to the Quit smoking Live Chat

Talk to a breastfeeding expert

Some text in the modal.